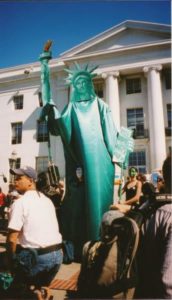 This puppet of the Statue of Liberty was featured in marches advocating for the implementation of the values that are associated with this iconic statue.

The original Statue of Liberty was a gift from France and installed in New York harbor on October 28, 1886.

Most often quoted in connection with the Statue of Liberty are the  last few lines of The New Colossus by poet Emma Lazarus:

Give me your tired, your poor, Your huddled masses yearning to breathe free, The wretched refuse of your teeming shore. Send these, the homeless, tempest-tossed to me, I lift my lamp beside the golden door!

“The New Colossus” is a sonnet by American poet Emma Lazarus (1849–1887). She wrote the poem in 1883 to raise money for the construction of a pedestal for the Statue of Liberty (Liberty Enlightening the World). In 1903, the poem was cast onto a bronze plaque and mounted inside the pedestal’s lower level. The important writer Louis Adamic was responsible for popularizing the poem and having it placed  on the statue.

The New Colossus  (full text of the poem)

By Emma Lazarus
Not like the brazen giant of Greek fame,
With conquering limbs astride from land to land;
Here at our sea-washed, sunset gates shall stand
A mighty woman with a torch, whose flame
Is the imprisoned lightning, and her name
Mother of Exiles. From her beacon-hand
Glows world-wide welcome; her mild eyes command
The air-bridged harbor that twin cities frame.
“Keep, ancient lands, your storied pomp!” cries she
With silent lips. “Give me your tired, your poor,
Your huddled masses yearning to breathe free,
The wretched refuse of your teeming shore.
Send these, the homeless, tempest-tost to me,
I lift my lamp beside the golden door!”
Source: Emma Lazarus: Selected Poems and Other Writings (2002) 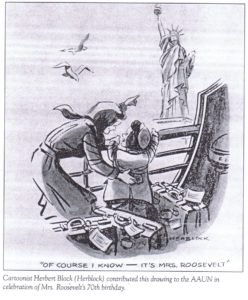 This cartoon shows how the sentiments in the poem were often associated with Eleanor Roosevelt. 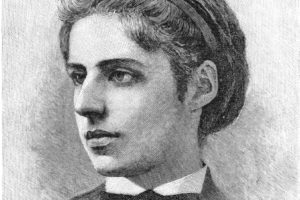