Today we hear that free speech protects all forms of speech, even when it incites others to violence, is blatantly untrue, or overtly demeaning to another. In order to understand our won feelings about Freedom of Speech, the history of the movement and what was originally intended is helpful. To access an overview of the events and the thinking of this philosophy when it first started and then when it became a modern movement in the 1960s, click here. 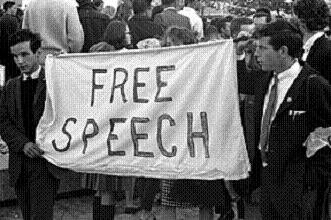 From Kit: When putting present day discussions into perspective,  it is helpful to know a bit about the people who shaped this movement that got its beginnings in Berkeley California in the early years of the the 1960s.

Michael Rossman was a key member of the steering committee of the University of California Freed Speech Movement in the first half of the 1960s. He was a close associate of Mario Savio who gained considerable notoriety, which he did not seek and which caused him much anguish. He was a true idealist, you see.

He was interviewed in the video Berkeley in the Sixties. The video is an important analysis of the events during this decade in a key location. Numerous individuals who participated are interviewed as well as footage of the events which crossed may movements.