My father’s first language was Croatian which he spoke with his parents at his home in Cleveland, Ohio. I remember Dad talking about his childhood growing up poor in a  ghetto of Croatian immigrants. He became an expert in English, making his living as a writer and editor. He taught me a lot about the power of language. It’s the words you choose, the order, the flow. He explained to me how to make my writing effective, using a journalistic style, of short sentences, lots of verbs and fewer adjectives and adverbs. I intuitive was drawn to a more Victorian style of decoration. Yet I came to rely on his early teaching as a kind of metaphor for how to stay the course in my life.

He loved to tell stories and he loved history. The stories of the past shaped the present for sure and could help us see into the future. That was why he never seemed to tire of reviewing his own past and got me to thinking from time to time about my own.

He was the  oldest child and the smartest, 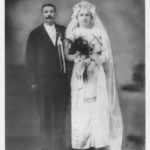 born  to  Croatian parents, my grandparents, who immigrated into the United States in the first decade of the twentieth century.  Because he spoke fluent Croatian and early was able to speak English he became the translator for his parents when they needed to conduct business.

The nuns who ran the elementary school he attended changed his first name to Steven.  He was also the only one of their five children to graduate from college. When looking for his first job, he found no one could pronounce or spell his Croatian surname, so he changed it to Dunbar. The change was for survival, but not shame regarding  his ethnic roots less prominent. 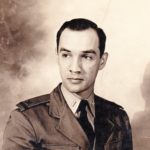 He met Dorothy while they were both attending Ohio State and they married soon after he graduated. In 1943, he enlisted in the Navy as a supply officer and served two years in Guam. There an incident occurred that nearly ended his marriage.

Shown here at the height of his professional life, while working at a major city newspaper, Steven was: a 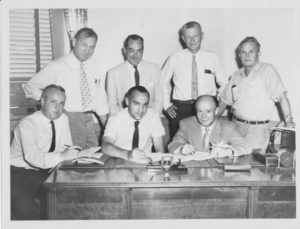 police reporter, book reviewer, copy editor,  and columnist. He  wrote a column in the 1960s entitled “The Civil War: One Hundred Years Ago Today”; and another  column on the ins-and- outs of  stamp collecting. He  became a minor celebrity in both these fields. He also wrote numerous book reviews and edited the annual Book Section.

The personal library he and Dorothy built was formidable. It was fueled by his trip to bookstores in downtown Cleveland and review copies that he received because he was a reviewer.

In 1966, when I was at the University, he left the major metropolitan paper and became the editor-in-chief for a string of suburban newspapers.

He also was an unconventional father, often taking me to appointments after school, helping with school projects and making diner before it became fashionable for Dad’s to do so…it was a necessity because my mother Dorothy had gone back to work as an elementary teacher when I was seven. I shard much with Steven during those times we spent together.

What surprised me most was when Steven died, he left me with a collection of letters, short stories and essays he wrote when he was a young man. In those days he expressed openly how much he was deeply in love with Dorothy and life itself. Later developments made these early sentiments hard to believe.

I also found a letter that Dorothy wrote on behalf of Steven to Louis Adamic, a novelist and journalist who came to American in 1915 from what was to become Yugoslavia. Adamic believed America had great potential but that tensions between ethnic minorities and the status quo were near crisis.

Steven was especially taken by Adamic’s book *My America (1928-1938). Ademic describes his  book as: covering New York, on being of two worlds, Ellis Island and my interest in the immigrants, the 1930s depression, the workers and the growth of the CIO, portraits of Robinson Jeffers, Mary Austin, and Cleveland’s Wasp of Virtue.

In her letter, Dorothy described Steven this way:

Steven has often expressed an interest in social work which was stimulated by a few courses in sociology which he took while in college. His interest in school courses lay outstandingly in the fields of sociology, philosophy, psychology, literature and writing. Publicity work for some of the government agencies has occurred to Steven as a possibility but we are not sure that this is right either. We are rather in a blind alley, a dilemma, as it were, and are casting about for any ideas or suggestions that may give us a lead toward a way out. It was with this that I thought you might help.

Steven has been almost carried away by enthusiasm while reading your usurpation of economic and social problems in My America. I feel, and so does Steven, now that some kind of writing or social work is his field with the purpose of helping our own people and other immigrant groups.

I don’t think Adamic responded. I am not even sure if my mother sent the letter. But having written the letter was an act in itself.

Steven had read the Bible at Dorothy’s request and discovered the mystical Song of Songs. The Love that was its focus deeply impressed him as did the Rose of Sharon.  He often wondered about the character by that name in the Grapes of Wrath by John Steinbeck.

His interest in people brought him to pursue his two hobbies, and make them into a public persona.

Stamp Collecting became a professional interest. He was viewed because of his column as an expert, judging at shows and authoring a book for teens about this popular pastime. When I was a little girl he would show me his latest stamp acquisitions saying the pretty ones were not the most valuable to the collectors, yet the most beautiful and pleasing. The collectors were looking for rarity and the pretty ones were usually more common.

History was another of his passions, especially American History, with a focus on the Civil War. In the early 1960s, he wrote a daily paragraph entitled the Civil War, One Hundred Years Ago today in which he founda something to comment on. He answered lots of mail about the characters and events he wrote about.

He was also a union leader in the Newspaper Guild, serving as President during one of the strikes in the 1950s. I was only 8 years old at the time but very affected by the experience. It went on for several months and I saw first hand at that tender age what it means to stand up for yourself and put your survival on the line. Of course I do not remember the particulars except my mother saying we had just enough money for a few more weeks. They had just taken on a mortgage a few years earlier, and had two children.

He worked out a way to travel, after he retired, to many places i the world.  He would send postcards an small gifts, and give a full report of the people he had met and the sites. His reactions were well grounded in research about these areas. He also had a way of befriending strangers so this form of travel suited him well. It also suited me since I got a personalized view of places I would never visit personally. He was a much better traveler than I could ever be.

After Steven died, I began to investigate his life, using his letters, papers and the books he had authored as well as my own memories of him. The picture that came forward told me a lot about myself, the social circumstances that I was born into and also what the larger global situation presented.  And presaged where we are today and where we are headed.