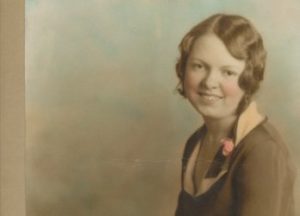 Dorothy is my mother. She was born in 1912 to parents, my grandparents, of mostly Scottish heritage with just a bit of German ancestry.  I was pleased to hear she was named after Dorothy in the Wizard of Oz; and William Jennings Bryan, Presidential candidate, a Democrat, an old school populist who defended the common person. He also defended Creationism in the famous Scopes Trial.  Obviously, the Wizard of Oz and Bryan were both favorites of Dorothy’s parents, my  grandparents, I met my grandfather when I was very young but my grandmother died when Dorothy was only five years old.

Dorothy was a modern woman. Grandfather agreed to send Dorothy to college so that when she was an adult she could support herself, which she did.

Dorothy when she was young had many aspirations. Among them were writing, both creative and sociological, and being a doctor. She achieved a degree in Home Economics and when she first graduated she worked as a hospital dietitian. She then, because of the Great Depression ended up working as a welfare relief counselor.

After World War II when Dad returned from Guam Dorothy did not work outside the home but undertook various writing projects for a few years until I was seven years old and established in school. She then went back to work as a medical clinical social worker, one of the few mothers in our suburban neighborhood to work outside the home.

During her later years she went back to school and trained as a teacher and received a masters in counseling. She worked for 17 years as an innovative elementary school teacher. I was very proud of her.

She was spiritual, finding solace in the Bible, though organized religion did not draw her. I found out from her writings she gifted me at the end of her life that she had an interest in Theosophy and related what we now call New Age philosophy which the were often dubbed “Power of Positive Thinking.“

Intelligence, political concern and fierce independence marked her personality. Many of these qualities were passed onto me.