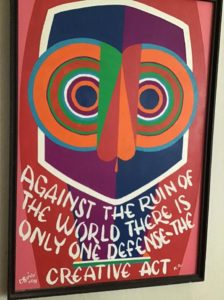 I remember hearing these words often as a child, “You can run, but you cannot hide.” It instilled a fear of God in me early on but in time this message proved to be critical at key junctures, because I knew what these words really meant, that I could not hide from myself. I knew it was just a matter of time before the truth of my nature would need to be known, owned and expressed.

I used to be an avid runner. I remember feeling fed by the endorphins and it would raise my energy level as well as my spirits. but when I entered the world of astrology, my teacher asked me a question that would ring in my ears for years, “Tell me Kristin, What are you running from?”

I have learned with unshakeable certainty that

it is just a matter of time before the truth of anything is revealed.

It doesn’t matter how much we may want to repress it, run from it, or hide it away, it will inevitably make its way to the surface.

The fast pace, intensity, and information overload of modern life can make it difficult to know what’s true, and/or what’s right for us.

Impeachment of Donald Trump — what caused this to happen

Betrayal, Lies, Treason against the Constitution of the the Republic